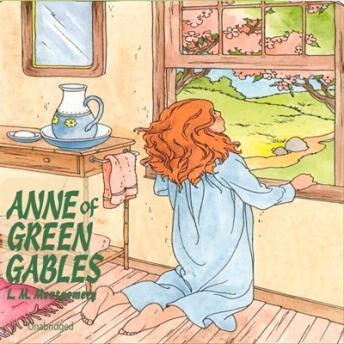 Anne is adopted by the Cuthberts even after a great mistake at the orphanage. But the frail red-headed young girl stays, even though not wanted at first. She is raised strictly but lovingly by the Cuthberts whose world is set upside down by her wonderful, creative and sometime crazy and eccentric ways. In the end, she gives them endless joy as she grows into womanhood.

AUTHOR
Lucy Maud Montgomery (1874 – 1942), was a Canadian writer of novels, short stories and poetry. Most of Montgomery’s novels take place on Prince Edward Island in Canada, and she has brought lasting fame to her home.

COMMENTARY
Reviews for Alcazar AudioWorks’ production of Anne of Green Gables
Of course, we’ve loved Anne-with-an-e and her adventures for a long time. We were first introduced to her through a mini-series on videotape, and we fell in love with this intrepid character who rose from neglected orphanhood to become a source of pride and a support to her adoptive family, bringing them joy along the way.

From that early introduction, which left us wanting more, we turned to the books, beginning with Anne of Green Gables, of course, and working our way through the series. However, the first book remains our favorite.

Now Alcazar Audioworks has released an unabridged reading of Anne of Green Gables.

(I just love audiobooks, especially when they are well-produced and read with skill and enthusiasm. I’ve always loved being read-to, from my earliest years, and with audiobooks I can be among the listeners once more. In addition, audiobooks allow us to listen while accomplishing other tasks: washing dishes, folding laundry, picking up, even artwork or handcrafts.)

Susan McCarthy does a wonderful job of reading, infusing Anne with enthusiasm, Marilla with proper stiffness, even bewilderment at this whirlwind responsibility she’s taken on, expressing Matthew’s shy kindness. It’s a pleasure to follow Anne’s fortunes and follies from the beginning to the end of the book. As a matter of fact, when we reached the last CD in this particular set, rather than going on to another book, we decided to listen all over again!

If you don’t recognize that reference, you really ought to make Anne’s acquaintance. Alcazar Audioworks’ Anne of Green Gables would make a delightful starting place.
Reviewed By: Jean Hall – EHO Eclectic Homeschool Online

Quotes about Anne of Green Gables
“”The sweetest creation of child life yet written.”” (Mark Twain)
“

Kaci Christiansen: Books are great, but audiobooks make catching up on lengthy stories easy wherever you are. The problem is that they may be costly, so to help out those without much literary cash to burn, we’ve rounded up the top sites to download audiobooks for free, whichever device you want to hear.

Bernice Gaylord: To buy an audiobook with no membership, simply locate a title you’d like then select Add to Cart (desktop site) or Purchase for $X.XX (cellular site). Note:Even if you don’t have a membership, then you are going to be asked to register with your account to place an order.